BIOLOGY 1406: BIOLOGY I FOR SCIENCE MAJORS.

Biology 1406: Scientists must be able to write about the experiments and the research that they are doing in a very concise and detailed manner.  This is important so that other scientists can repeat the work using the same experimental conditions, so that the data can be confirmed. In the lab report written by Amanda Allen, Devyn Fitzpatrick, Lindsey Solis, and Esteban Vasquez, relevant background information is provided so that scientists can understand the basis of the experiment being carried out and then detailed information is provided on the methodology so that if need be, the experiment can be repeated using the same conditions.  The data that the group presented is very clear and is then discussed in detail with reference to published works. 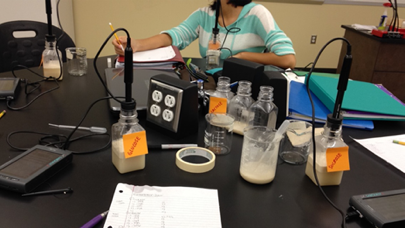 Alcohol was first brewed in 500 B.C and is still made today following the same basic steps. Although the exact date of the  invention of alcoholic beverages is not known, the Italians and French are credited with great progress in the production of wine. The Danes and the Swedes are also associated with alcohol production, but instead of wine they experimented with other elaborate mixtures to create new alcoholic beverages. (J. Trackey & H. McDowell, 2015). Aside from the different mixtures and procedures that take place to establish a set alcoholic content, all ethanol products have one thing in common: each of them go through the process of fermentation. This is defined as “an anaerobic (without oxygen) cellular process in which organic foods are converted into simpler compounds, and chemical energy (ATP) is produced” (“Fermentation”, 2008). The process of fermentation is not easy though. Most of the time it takes years to make an optimum alcoholic beverage. To speed up the process of fermentation, a microscopic yeast organism called Saccharomyces cerevisiae, which is a single celled eukaryote that is capable of fermenting carbohydrates. Generally, yeast is activated under warm temperatures between 25 and 45 °C and requires the help of the catalytic enzyme zymase in order to enable the conversion of carbohydrates into ethanol products (J. Diwan, n.d.). Fermentation can be expressed through the following chemical equation: “C6H12O6 (Glucose) + Yeast (Zymase) → 2 C2H5OH (Ethanol) + 2 CO2 (Carbon Dioxide)” (“Rates of Reaction”, 2015).
However, not all carbohydrates are useful for fermentation. Five samples of carbohydrates consisting of glucose, sucrose, maltose, fructose, and lactose were examined to observe which carbohydrates are useful for ethanol fermentation, as well as to test which produced the highest nontoxic ethanol levels. If a variety of carbohydrates including glucose, sucrose, lactose, maltose, and fructose are allowed to ferment with the yeast, then the ethanol vapor will indicate the highest alcohol content in the glucose fermentation sample. This is based on the notion that S. cerevisiae (yeast) “could convert 100 grams of glucose into 51.4g of ethanol,” which is more than the other carbohydrates are able to yield (Wasserman, 2015). Thus, supporting that glucose ferments more rapidly than any of the other carbohydrates and produces the highest levels of ethanol (“Alcohol Fermentation”, 2007).
Procedure:

Thirty grams of yeast were measured using an electronic scale. 200 mL of non-distilled tap water were warmed to 40 degrees Celsius in the Isotemp and placed in a beaker.  The 30 grams of yeast was added to the 200 mL of tap water. A metal spatula was then used to mix the solution, with a second metal spatula used to remove any yeast that accumulated in the convex side of the first spatula. The yeast and water were mixed until the entire solution achieved an even consistency and there were no clumps left in the beaker. Seven bottles were collected and labeled “Glucose,” “Fructose,” “Lactose,” “Sucrose,” “Maltose,” “Water with yeast,” and “Water”. One was placed on top of the electronic scale and zeroed out. The yeast solution was added into the bottle until it reached a mass of 30 grams. This procedure was repeated for all bottles except the one labeled “Water”. Prior to this, 100 mL of each of the aforementioned carbohydrates were measured out into beakers, and placed in the Isotemp to reach a temperature of 40 degrees Celsius. Four Labquest 2s were connected to four Vernier ethanol sensors and calibrated to take one measurement every minute for 10 minutes. Four carbohydrates were added to the four bottles containing the 30 grams of yeast solution and the ethanol sensors with a rubber stoppers were plugged into the bottles and the record button on each of the Labquest 2s was pressed. The samples were allowed to ferment for ten minutes, without movement or further interference. After the ten minutes, ethanol sensors were cleaned, the four fermentation samples were thrown down the drain and rinsed with copious amounts of water, and the three remaining fermentation vats were tested through the use of the ethanol sensor and were recorded by the Labquest. After the samples were recorded, the remaining solutions were discarded and the lab area was cleaned using a 70% alcohol solution. 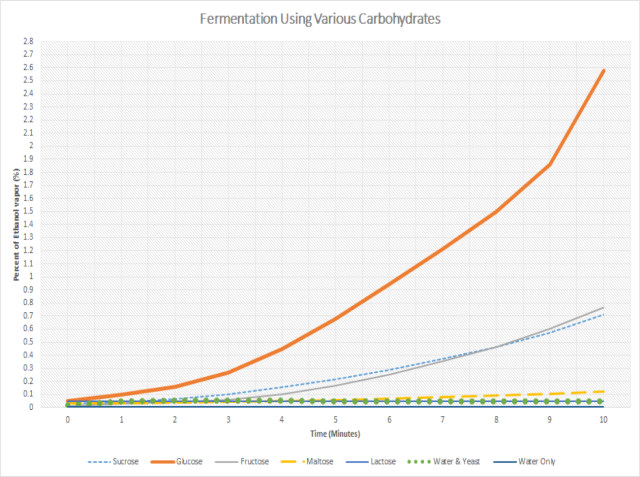 Figure 2: Time-relative concentration of ethanol vapor over ten minutes for each individual fermentation sample. “Water and yeast” and the “lactose” samples had extremely similar results, therefore the lines are on top of each as shown above. Refer to figure 1 for numeric values.

The results obtained from the observational experiments support the hypothesis that glucose would produce the highest alcohol content. Through the use of the Vernier ethanol sensors, the recorded percent ethanol vapor was tested for each of the five carbohydrates and the two controls of water and water with yeast. As depicted in figure 1 and 2, glucose undertook a much faster rate of fermentation than the other carbohydrates, and at the end of ten minutes had produced approximately 2.577% of ethanol vapor opposed to a 0.284% average for the other carbohydrates. This was most likely due to the direct use of glucose in the glycolysis cycle throughout fermentation, allowing for it to “not require any extra energy to convert it into a usable form” (J. Diwan, n.d.). The amount of ethanol produced by glucose was 3.355 times higher than that produced by fructose, the second highest ethanol-producing carbohydrate in this experiment. Figure 2 clearly revealed that the sucrose sample’s amount of fermentation trailed just behind fructose, whereas maltose and lactose showed low ethanol production rates. “Lactose” and the “water with yeast” samples both showed similar levels of fermentation throughout the course of the ten minutes, which supports the inference that lactose is a non-fermentable ethanol carbohydrate. In addition, the reason that the “water with yeast” control sample showed higher results in figures 1 and 2 than the “water only” control sample, which did not ferment at all, could have been due to the use of tap water rather than distilled water. Tap water has the possibility of containing impurities such as bacteria, metals, nitrates, disinfection by-products, or pollution that could have interacted when mixed with the mere presence of catalytic yeast, thereby allowing fermentation or a fermentation-like process to occur on behalf of the yeast’s possession of an enzyme. Additionally, the simple fact that yeast is an organism that undergoes normal bodily processes means that some waste will be present in the form of ethanol.

If this experiment were to be repeated, the use of distilled water rather than tap water would have resulted in more precise outcomes. Time limits also impacted the results because it forced a constraint on the experiment’s possibilities and pushed experimenters to quickly run through the procedure, rather than take careful, measured steps in carrying out the experiment. Another factor that negatively impacted the results that could be corrected if the experiment were to be repeated is the procedure to activate the yeast. This conclusion was drawn from observations of a prep trial where the yeast was malfunctioning due to insufficient preparation. This lead to skewed results and the eventual scrapping of two full runs of the experiment. Compounding the issue of yeast activation was the initial approach of measuring out yeast volumetrically. As the yeast began to foam on its own, this proved highly inaccurate and eventually it was decided that mass should be used to measure out the amount of yeast-water solution allotted to each fermentation sample. It is also important to note that the most reliable results must be obtained at one time with a single yeast sample, for if the experiment were to be carried out across several days, the yeast sample may not be equally active for each sample and could lead to skewed results. Lastly, the simple fact that there were not enough bottles and Vernier ethanol sensors or LabQuests 2 to carry out all trials at the exact same time meant some of the yeast may have died while the ten minutes elapsed. Beyond this, however, the fact that the materials were shared across many groups and multiple classes meant that the possibility of cross-contamination was always present.

Ultimately, it was concluded that among the five carbohydrates tested, glucose was the most successful in ethanol fermentation, which enabled it to produce the greatest amount of nontoxic alcohol levels. This experiment was significant because it indicated that not all carbohydrates are sufficient for ethanol production, whilst also supporting glucose as the most efficient carbohydrate in ethanol production, due to the effective metabolism of glucose by the yeast. On the whole, ethanol fermentation is an important process in society and is used in the production of a variety of substances including beer, wine and bread.

The results of this experiment are similar to the finding in the Kluyveromyces marxianus yeast experiment carried out by Rodrussamee, Lertwattanasakul, Hirata, Limtong, Kosaka, and Yamada. Their study revealed that glucose did contribute to higher amounts of ethanol production and is able to repress the fermentation of other sugars at varying temperatures (Rodrussaamee et al., 2011). In addition, in the experiment “Screening Wild Yeast Strains for Alcohol Fermentation from Various Fruits”, biologists were able to conclude that “the diversity of yeasts…surveyed represented mostly those with selective characteristics of glucose and alcohol tolerance, efficient maltose utilization, and starch hydrolysis” (Yeon-Ju et al., 2011). Furthermore, although maltose was most efficient in their study of fruit carbohydrates, glucose proved its importance in the results as the second highest producer. However, in an experiment performed by Schuster, Van Zyl, and Coller (2011) to find out the effects of different isomers of sugar on yeast respiration, it was revealed that sucrose was the best carbohydrate, with glucose in second. This result does not directly support the results found within this experiment, but different experimental conditions and outside forces could have impacted either of the experiments’ results, and they were not directly testing the same variables. All in all, it can be confirmed through several of these studies that glucose truly is productive in ethanol production despite it not always being the optimum usable carbohydrate.
Acknowledgements:
Regards to Professor McDowell for the supplies and guidance during experimentation. Also, much gratitude to LSC-Montgomery funds for the science program and its availability to students for learning purposes.

Rates of reaction: What is fermentation? (2015). GCSE chemistry. Retrieved from http://www.gcsescience.com/rc17-fermentation-yeast-alcohol.htm

This entry was posted in Visual Communication 2016. Bookmark the permalink.