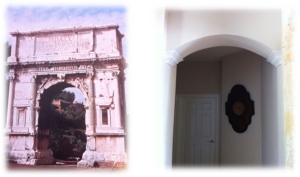 Greco-Roman arch accents influenced the blueprints of American architecture. The Romans applied the idea of the arch to many of their great monuments such as the Colosseum, which was inaugurated “. . . in A.D.80” (Mueller 1). Arches flow along the entire exterior and the walls of the interior of the Colosseum; both reoccurring on the lower and upper levels. The Colosseum’s first set of “. . . games was the venation, or wild beast hunt, which occupied most of the morning: creatures from across the empire appeared in the arena, sometimes as a part of a bloodless parade, more often to be slaughtered” (Mueller 5). During these games thousands of animals were slaughtered, “the emperor Titus offered up 9,000 animals. Less than thirty years later, during the games in which the emperor Trajan celebrated his conquest of the Dacians . . . , some 11,000 animals were slaughtered” (Mueller 5). The arches that made up the hypogeum of the Colosseum were accompanied by a gate that would rise to allow these animals to appear “. . . as if by magic . . .” to face the opponent in the ring (Mueller 5). The use of gates in the arches in the hypogeum of the Colosseum showcases the importance of the arches used by the Romans both in an esthetic and functional sense. 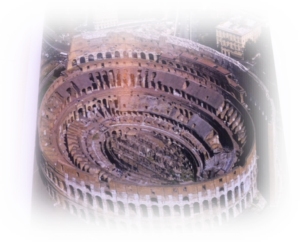 The arch has also been applied to the design of the Arch of Titus, which was built in “81 C.E.” (Fiero 160). This monument features a Triumphal arch, which is a “monumental structure embodying one or more arched passages, frequently built to span a road and designed to honor a king or general or to commemorate a military triumph” (Triumphal 1). The Arch of Titus withholds a Latin inscription at the top of the arch stating “. . . that the Senate and the Roman people (SPQR) dedicate the arch to Titus, son of Vespasian Augustus” (Fiero 160). The concept of the Roman arch has been inherited by American architects. For example, photos of The White House display Roman influences of the arch on the exterior. The White House boasts arches on the lower level of the front face, (“White House”). The White House is an enormous symbol of the United Sates, just as the Colosseum and the Arch of Titus are for Rome. The White House is symbolic to The United States because it is “where power is brokered and crisis confronted, where national policies are born and tendered, where a national spirit is nurtured. It is the production studio for a crucial device- the media. And it remains the coveted stop for almost every other power holder in the world” (Sidey 1). The arch is a symbol of the Greco-Roman architectural movement that shows pristine expertise in engineering. The White House is not just a building. It is a monumental symbol of the great power and prestige of the United States of America. 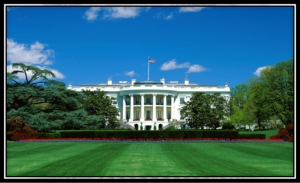 In The United States, government buildings are not the only buildings that flaunt these arches. Home design in America utilizes arches in the interior as well as the exterior as shown in photos taken by Collin Edwards. Examples of interior arches can be found in wall niches, archways and kitchen appliance insets. Home exteriors display arches with garage door openings and brickwork on windows. The addition of arches in American homes adds great character and interest. 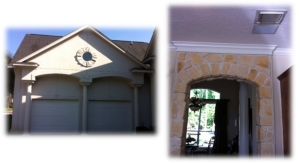 Greco-Roman pillars influenced the blueprints of American architecture. The Greco-Roman monuments exhibited pillars in the interior as well as exterior. The first three orders were designed by the Greeks. These include Doric, Ionic,  and Corinthian. Later, “The Romans added as Fourth and Fifth orders of Architecture the TUSCAN and the composite orders” (Rahmatabadi & Toushmalani 1). The design of the Tuscan order “is a simplified version of the Doric order, about 7 diameters high with base, unfluted shaft, and simply moulded capitol, and with plain entablature” ( Rahmatabadi & Toushmalani 1).The composite order is a combination of the volutes from the ionic order with the capitol of the corinthian order, furthermore, it “ was not evolved until the first century A.D.”(Rahmatabadi & Toushmalani 1). These orders are commonly found on Greco-Roman monuments. The Pantheon, in Rome, is an example of a monument with columns. The Pantheon features eight corinthian columns on its front face, which signify the Roman culture. The pantheon “was built during the reign of the Emperor Hadrian (AD 117-138). . . as a radical reconstruction of a temple which had been built in 27 BC on the same site by Augustus Caesar’s General Agrippa but later destroyed by fire”(Brinkworth & Scott 1). The Pantheon features a dome top, which “was the largest circular structure ever built until modern times”, with a diameter “of 43.2 meters on top of a cylinder of the same diameter and height of 21.6” (Brinkworth & Scott 1). Many American monuments feature columns. 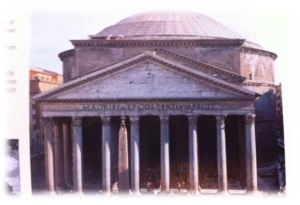 Greco-Roman columns are found on American monuments such as The Texas State Capitol building. The building was “Completed in 1888 as the winning design from a national competition, the Capitol’s style is Renaissance Revival, based on the architecture of 15th-century Italy and characterized by classical orders, round arches and symmetrical composition” (“Texas Capitol”). The Capitol building features corinthian columns on the second story of the north face. There are also corinthian orders encircling around the dome structure on top. These columns are originally from the Greco-Roman era but show great influence in American architecture. 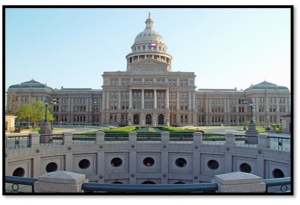 Columns are also featured in American Homes to show character and class, also displayed in photos taken by Collin Edwards. The pillars may be on exterior of the house or the interior. The front elevation of the house or the rear may include orders of any kind. The interior may host orders in between two rooms, showing where the transition from one room to another starts. 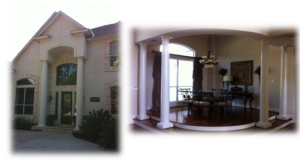 Cornices are fine detailed accents that make the exterior as well as the interior of a structure very tasteful and desirable. These accents were originally crafted into the monuments forged during the Greco-Roman era such as The Altar of Zeus, which was “Dedicated to Zeus and Athena. . .” (Fiero 133). A cornice is a “molded or decorated projection that forms the crowning feature at the top of a building wall or other architectural element” (Cornice 1). The cornice “had its origin in the primitive eave projection: the Greek Doric and Ionic cornices recall early wooden roof forms, and the Egyptian cavetto-and-fillet cornice is a derivation of the overhanging papyrus stalks that formed the eaves of primitive shelters” but “early lost its structural significance and became a stylized decorative element”(Cornice 1). Later, “in the Greek and Roman eras it assumed firmly standardized forms in the classical orders that were retained” (Cornice1). Cornices are also arrayed in American domestic structures. Cornices are a representation of class and fine carpenter work. Collin Edwards’ photos show many examples of cornices in American homes. Cornices in American homes can be found above the fireplace, entertainment center, or cabinets. Cornices are also crown moldings that align either the floor or ceiling of a home, giving the home a posh feeling.

This entry was posted in Visual Communication 2013. Bookmark the permalink.